When I was younger I could never remember the difference between a hypo and a hyper. So, my mum used to say to me that “po” is low and, from that, it has stuck with me. A cool little saying to use and remember if you’re still new to type 1 life #diabetestips

My bloods tend to run on the lower side but, despite this, I have always had really good hypo awareness, something that not everyone is fortunate enough to have. I feel it coming; the sweats, shakes, fuzzy eyes, it hits you all at once and you know too well exactly what is happening. Having a hypo is the weirdest thing ever and trying to explain how it feels to a non-diabetic has to be the hardest. It doesn’t matter what words you use or how much detail you include, unless you have personally experienced low blood sugars you will never fully understand what it’s like.

For me, its just one big, hot, blurry mess. Nothing makes sense, nothing works how you want it too, and in those few minutes you completely lose touch with all of reality.

Thankfully I can count on one hand how many times I have had what I consider to be a bad hypo. I can vividly remember the first one and  can honestly say that it was the scariest half an hour of my entire life.

Usually when treating a hypo I’ll have a few mouthfuls of Lucozade, followed by a biscuit or two and within fifteen minutes I’d be completely fine again. This night however was a totally different ball game. I’d forgotten to test before my dinner and injected thinking everything was normal. Clearly my carb counting that night was an epic fail and within 20 minutes of finishing my food I knew something wasn’t right. I’d just had about 10 units of novorapid and was aware that it would still be working in my system for at least two hours. So, when the feelings started coming the panic also set in. I checked my levels and already I was at 2 something. I couldn’t see, I couldn’t move and I couldn’t speak. Luckily I was with a friend who realised what was happening and knew what to do. The tears began streaming and the anxiety worsened. My friend sat with me and held a can of coke to my mouth while I tried not to spill and dribble it everywhere. They made and fed me two slices of toast with Nutella and then we waited. Waited for the feelings to disappear and for normality to come back. But it didn’t. Not even a little bit. Fifteen whole minutes went by and my levels had not changed at all. It felt like forever. After a second can of coke and half a pack of bourbons we were finally getting somewhere. Another fifteen minutes went by and within that time my levels had come up to 6 something. I started to feel slightly human again.

I am not exaggerating when I say that in that moment, I thought I might die. Sounds ridiculous I know, but its the truth. I was genuinely terrified to go to sleep that night and laid awake, checking my sugars every hour, until I felt safe again. 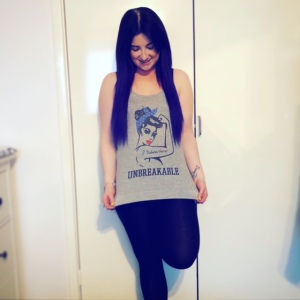 The purpose of this post isn’t to scare anyone but instead to make you realise and remember that this is an actual thing. This is our reality, our truth. Its part of our life as we know it and, despite the brave front and positivity, there are some moments in our journey when we feel like crumbling and falling apart. If you are privileged enough to know or look after someone with type 1 diabetes, don’t be scared. Don’t get angry or upset when they’re having a hypo and can’t communicate with you. Give them sugar, give them space and give them time. Although in those minutes it feels like an eternity, they really just need a moment.